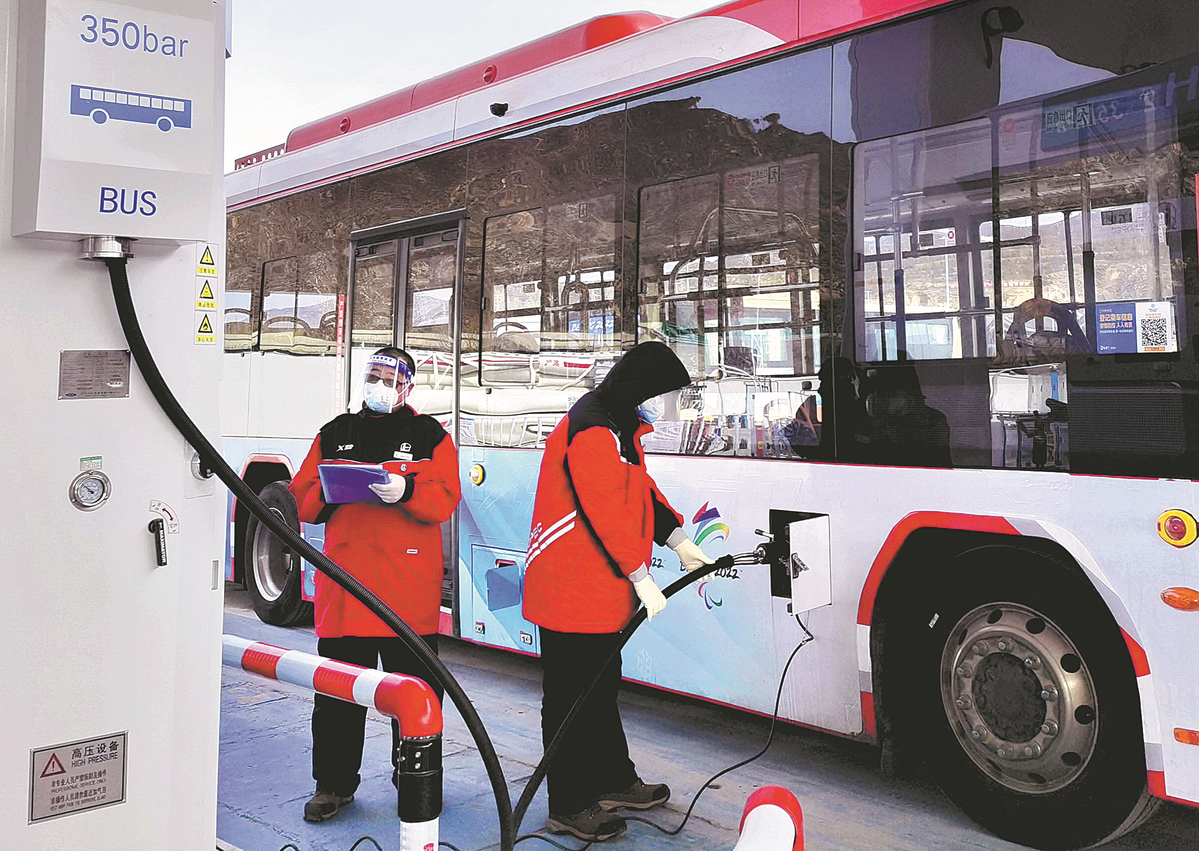 Two workers fill a bus with hydrogen fuel at a fueling station in Zhangjiakou, Hebei province, on Feb 11, during the Beijing 2022 Winter Olympic Games. (Photo for China Daily)

First used during the Olympics, the buses are able to start quickly in winter temperatures as low as -30 C in the city, which is located about 160 kilometers north of Beijing.

Since the global sports event last year, Zhangjiakou has continued to explore the practical use of hydrogen vehicles, taking advantage of its plentiful wind and solar energy resources, according to Wang Hewu, executive director of the Zhangjiakou Hydrogen Energy and Renewable Energy Research Institute.

Wang said that a key challenge in using hydrogen-fueled vehicles is solving the question of water, which is produced as a byproduct of burning the fuel. In warmer climes, this would not be a problem, but in chilly Zhangjiakou, it freezes and eventually causes battery performance to decline.

The institute has taken the lead in developing a whole chain information monitoring system to track the process, from hydrogen production, storage and transportation to use in the city.

SinoHytec Power Technology, a leading enterprise in the field of hydrogen energy in Hebei, researched solutions to problems, including how to quickly start fuel cells at low temperatures.

"After multiple rounds of technical iteration, the performance of the fuel cell system has been greatly improved," said Song Haiying, general manager of the company.

During the Winter Olympics, 710 hydrogen-powered vehicles were introduced to Zhangjiakou. It was the largest-ever demonstration of the use of hydrogen fuel cell vehicles at an Olympic Games.

Since then, hydrogen-powered vehicles in the city have carried over 80.7 million passengers and covered over 27 million km. In addition to serving as public transportation, they are being used in street cleaning, logistics and to transport heavy cargo.

Following the release of a national plan in March aimed at promoting the development of the hydrogen energy industry, local authorities are putting together detailed policies to seize emerging opportunities.

By 2025, the country will have about 50,000 hydrogen fuel-cell vehicles, and annual hydrogen production from renewable energy sources should be somewhere between 100,000 to 200,000 metric tons, according to the plan released by the National Development and Reform Commission and the National Energy Administration.