In late autumn, the bubbles came out from underground in the north of Wujiazhuang Village, Xingtai Economic Development Zone, Hebei Province， converging into a 300-mu sparkling natural lake.

"This spring is one of many sub-springs of the Goutou Spring, which had been dried up for a long time. At the beginning of this year, more and more water began to come out from the spring, and the height of water could even rise to one foot above the ground," said Song Shengda, a 70-year-old villager from Wujiazhuang Village on September 26, watching the ancient spring that resurfaced after more than 30 years and reminisced about the past. In the 1950s, Xingtai was rich in water resources. There were nearly a hundred of springs that had names like Goutou Spring, Yehu Spring, Dahuo Spring, Zhenzhu Spring, Penyu Spring and Heilong Pool. Many small springs just got no names.

At that time, clear spring water converged into rivers, and there were affluent villages near the rivers where people lived and worked happily. The eastern part of Xingtai was famous for producing high-quality rice and reeds that sold well in the northern and northwestern regions of China.

“We harvested rice year after year when food was scarce in other regions. Back then, you could just dig a hole in the ground and see water, so you didn't have to worry about watering the land at all,” Song Shengda said. In addition to that, every villager wove reed mats which can be traded for money.

In the 1980s, however, the massive exploitation of groundwater resources caused a continuous decline in the groundwater level in Xingtai. Not only did Xingtai become to a large groundwater funnel in northern China, but the springs also dried up one after another.

Around 1986, Goutou Spring dried up completely, leaving only a deep pit. A small puddle of turbid water at the bottom of the pit makes people sigh. Along with the drying up of the "hundred of springs", local people lost source of income, and more and more people left their hometown and went out to work elsewhere.

In order to restore the appearance of a hundred springs, Xingtai City began in 2014 to take a series of measures for overall management on groundwater overdraft and carry out water ecological protection and restoration.

In particular, the South-North Water Diversion Project passed through Xingtai in 2014, replenishing large, medium and small rivers such as the Qili River, the Baima River, the Liyang River, the Bi River and the Wu River. Accordingly, the groundwater levels began to rise. Good things come to those who work hard. In August 2021, the Bureau of Water Resources of Xingtai City received many reports on the re-spewing of springs such as Goutou Spring and Heilong Pool. Sun Zikui, Chief of water administration water resources and water conservation section under the Bureau of Water Resources of Xingtai, was so excited to hear the news that he put aside the work at hand and ran to the springs to put instruments to measure the water levels. "I went back a few days later to check and found that the water levels had inundated the measuring instruments," Sun Zikui said.

The springs are gushing out again, bringing the people of Xingtai not only the beauty about the water, but also activating people's memories of this spring city. "Now there are egrets, herons, water ducks and many other wild birds around the Goutou Spring, our childhood memories have come back,” said resident Wang Ruihui, with a smile of joy. 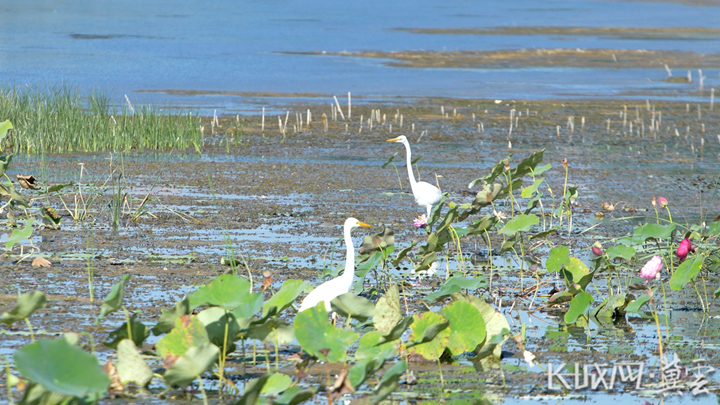 With the improvement of the ecological environment in Xingtai City, wild birds such as egrets have appeared around Goutou Spring.(Photo by Qiaoya/Great Wall New Media)

Right now, Wujiazhuang Village is taking the opportunity to attract investment for the construction of the Goutou Spring Park. Local residents hope to take advantage of the good ecology to create more jobs, so that life can be more comfortable and convenient.

The clear spring water is a silent proof of ecological improvement, and the landmark achievements in the comprehensive management of groundwater overdraft in northern China. In Sun Zikui's view, "Water is the aura of a city, and with water, Xintai is full of life!"