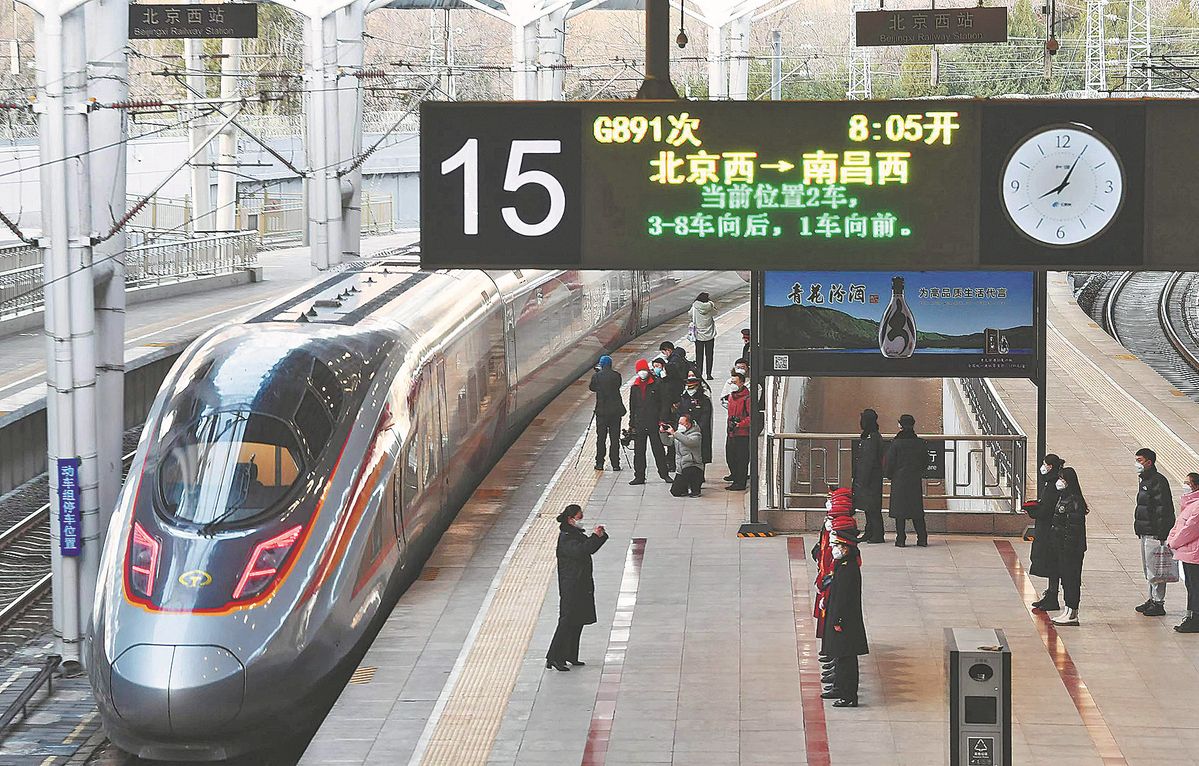 People take pictures at Beijing West Railway Station on Monday, before the departure of a new service that cuts travel time between Beijing and Shijiazhuang in Hebei province to one hour. (Photo by Zou Hong/China Daily)

The national railway operator said that on one hand, it will coordinate epidemic prevention and control and on the other hand, it will take full advantage of a number of newly opened lines to improve the network's efficiency and capacity.

Greater passenger and cargo demand is expected during the upcoming Spring Festival travel rush, which begins on Jan 7 and ends on Feb 15, which will include family visits and tourism, the resumption of work and production, and transport of coal for winter power production.

After analyzing travel trends via the 12306 ticket booking and query system, the company has resumed train services suspended due to the epidemic.

To prepare for the Spring Festival travel rush, more season tickets and other coupons that benefit business travelers and frequent commuters will be available.

More commuter and rapid services have been organized for Beijing, Tianjin and Hebei province to boost the region's connectivity.

China Railway Beijing Group, the regional railway operator, has been running faster passenger trains between Beijing and Shijiazhuang, the capital of Hebei, since Monday.

According to the new schedule, there will be 20 high-speed services every day, reducing travel time between the two cities to an hour.

Zhang Tong, who comes from Shijiazhuang and works in Beijing, commutes between the two cities every week.

"The fastest trip used to be about one hour and 20 minutes, now it is faster," she said.

A new line connecting Chengdu and Kunming, capitals of Sichuan and Yunnan provinces, opened on Monday, cutting travel time between the two cities to 7.5 hours.

It also slashed travel time between Chengdu and two other major cities along the way — Xichang and Panzhihua — to 3 and 5 hours.

It links to another line between Yiyang and Changsha, capital of Hunan. With a designed speed of 350 km/h, the new line has slashed travel time between Changde and Changsha to 59 minutes and is part of a major line connecting the city of Chongqing with Xiamen, a coastal city in Fujian province.

A line linking Jiamusi and Hegang in Heilongjiang province also entered operation on Monday, slashing travel time between the two cities to 44 minutes, and as a result travel between Hegang and Harbin, the provincial capital, has also been cut to about 3.5 hours.

During the Lunar New Year, maximum passenger capacity across the national network will be 11 percent higher compared to the same period in 2019, the last travel rush before the COVID-19 epidemic, the company said.

Freight capacity will also be improved as a result of the new schedule and will help boost the transportation of coal to meet demand in major coal-producing regions, according to the company.