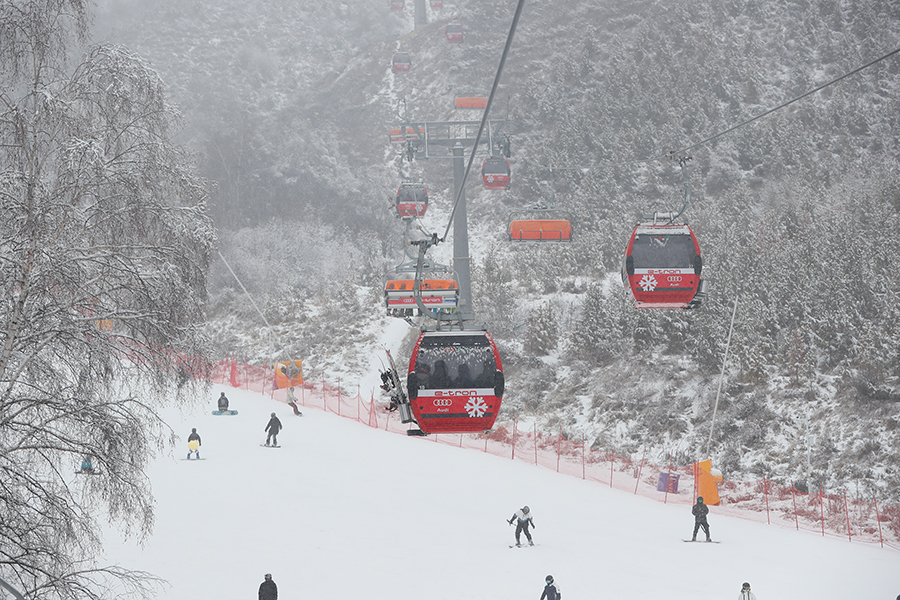 A major venue for the 2022 Winter Olympics, Genting Snow Park in Chongli of Zhangjiakou, Hebei province, has become a popular destination for skiers in China. (Photo by China Daily)

As the first snow season since the Beijing 2022 Olympic Winter Games approaches, venues of the Games in Beijing and Hebei province are readying themselves for visitors.

One of the main venues of the Games, Shougang Park in Beijing's Shijingshan district took into consideration the long-term use of the facilities during the design stage.

Liu Yuchuan, head of the Big Air venue project in Shougang Park, told Beijing-based Guangming Daily: "Snowboard Big Air is an extreme sport in the ice and snow world, and there are less than 500 Big Air snowboarders in the world. Many competition facilities for this sport from past Olympic Games have been demolished or left idle after the Games."

Thanks to an "elegant structural design", Liu said the Shougang Big Air venue is able to be transformed within 48 hours to serve a different purpose.

Since the conclusion of the Beijing Winter Games, Big Air Shougang has played host to multiple sports events, such as an orienteering race for Beijing residents.

On the future of the facility, Liu told Guangming Daily that they are working to make it a long-term venue for the China leg of high-level international snowboarding and freestyle skiing competitions.

"Big Air Shougang will also host training programs for professional teams from outside Beijing and offer training for snow sports referees and coaches," Liu said, adding that commercial activities such as launch events will be staged during the times of the year when there is no snow.

On top of winter sports, Shougang Park has been exploring areas such as basketball, soccer, artificial intelligence, science fiction, metaverse, esports, intelligent driving and artistic performances, among others. 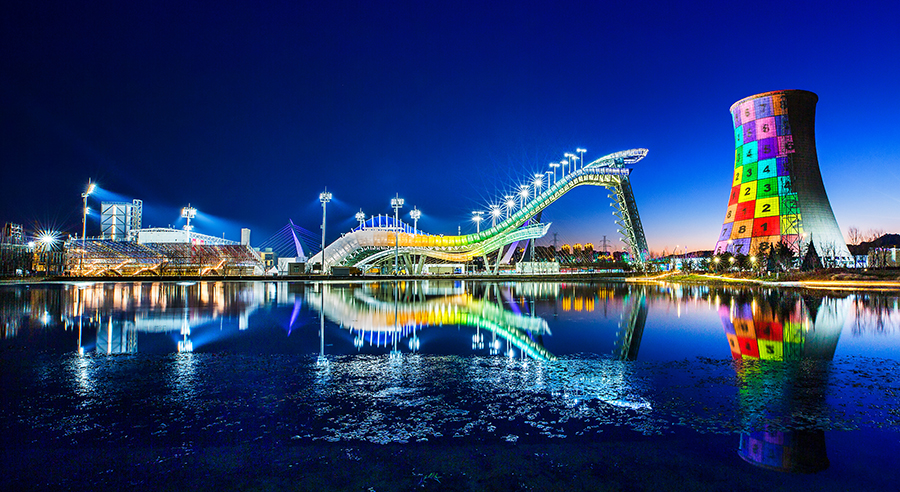 A dazzling night view of Shougang Park in Beijing, which was put in the limelight during the Games. (Photo by China Daily)

From Aug 31 to Sept 5, Shougang Park served as one of the venues for the China International Fair for Trade in Services.

The park is also home to offices of more than 100 companies including Chinese internet giant Tencent. The studios of science-fiction writers Zheng Jun and Fu Guofeng are also located in the park, Guangming Daily reported.

One of the hosts of the Beijing Winter Games, Chongli district in the city of Zhangjiakou of North China's Hebei province, is ready to welcome winter sports enthusiasts, many of whom long to experience the Olympic venues themselves.

A major venue for the Games, Genting Snow Park in Chongli will open five Olympic facilities to the public by the end of December, according to a China Tourism News report.

A representative of Genting told the newspaper that they have scheduled more than 30 events for the upcoming snow season, including an opening carnival, a chase tag competition and an electronic music party on the snow.

Fulong Ski Resort in Chongli hosted one of the legs of the Games' torch relay. It will develop winter camps and study tours themed around this Olympic heritage, a staff member of the resort told China Tourism News.

"We hope to keep the Winter Olympic legacies alive," a representative of Chongli district was quoted as saying by the newspaper. During the upcoming snow season, the district will stage close to 100 sports, cultural and tourism events. They include a national alpine skiing invitational and the Hebei ice and snow sports league.

Going forward, Hebei will host more high-level professional competitions and training programs, and encourage competition venues to branch out into other areas such as culture, entertainment, tourism and wellness so as to attract more tourists to the province and boost the numbers of regular participants in ice and snow sports, according to the China Tourism News report.