Every Sunday, a rehearsal room in the campus of Zhejiang University, east China’s Zhejiang Province, is filled with the singing voices of the university’s Peking opera enthusiasts.

Wang Yilin, head of the university’s Peking opera club, said that the first opera she learned was a part of the Peking opera piece titled “Shajiabang” and she had spent a whole month practicing it before being able to perform it properly. 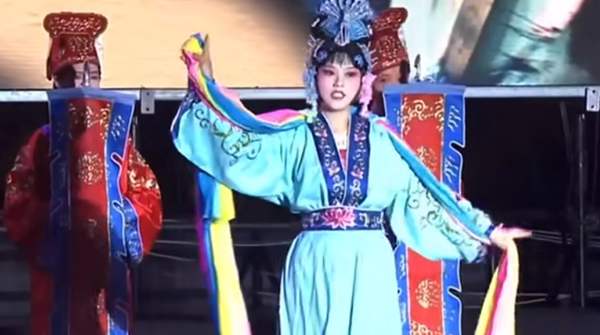 A member of a Peking Opera club in Hebei University in Baoding, north China’s Hebei Province, performs during a party. (Photo by People's Daily Online)

Nowadays, opera clubs are thriving at universities across the country, spreading opera culture, including Peking opera, Kunqu opera, Henan Yu opera, Sichuan opera, and Yue opera, among other opera genres. As a result of these efforts, an increasing number of young people are falling in love with opera culture.

In fact, these opera clubs were established by university students.

“At the beginning, some students thought that operas were something for their grandparents, instead of for young people to enjoy and learn,” said Fu Junhao, founder of a classic opera club in the Shenzhen Institute of Technology, Shenzhen city in south China’s Guangdong Province.

When the club was searching for new members, the club did its best to let young students experience the fun of classic operas by inviting them to touch opera props and try on opera costumes, as well as teaching them to paint masks, and to practice some basic opera singing techniques.

The participation of university students in the promotion of the opera culture has injected renewed vitality to traditional operas. In addition, the university students have innovatively combined operas with pop music and fine arts, and turned elements of operas into cultural and creative products in an effort to further explore the value of the traditional opera culture in modern times.

Since 2021, the opera club with Shenzhen Institute of Technology, together with its counterparts from other universities across the country, launched a project to showcase videos that had captured some of the best moments of opera performances delivered by members of the university opera clubs, on China’s popular video sharing platform Bilibili.

To celebrate the World Theatre Day on March 27, 2022, several university opera clubs held an online opera show, presenting classic operas to their audiences. The show was also livestreamed on Bilibili and Douyin, a famous short-video platform in China.

“As the audiences experience these operas themselves, they can find the beauty of operas. In the era of the Internet, we’re constantly exploring new ways to spread the opera culture so that it can reach more people,” said Wang.