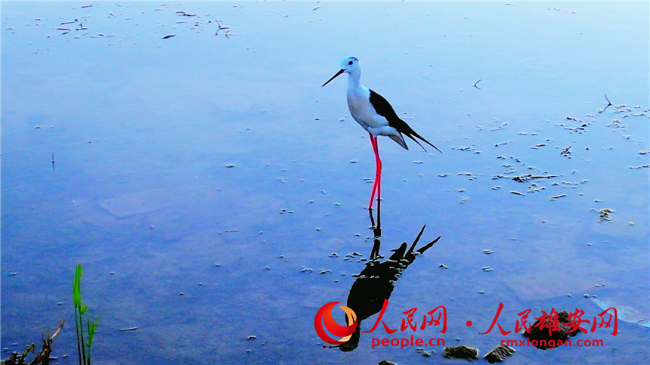 One of the most common migratory bird species in Baiyangdian, black-winged stilts have black wings, white body feathers, and long, bright red legs.

Because of their slender figure, exceedingly graceful movements, and in particular, long legs that are more than 30 centimeters long, black-winged stilts are dubbed the "supermodels" of birds. Local residents living near Baiyangdian Lake have given them the name of "Ms. Long Legs.”

The bird species is on China’s list of terrestrial wild animals, which are under state protection and are of important ecological, scientific and social value.

Over the past years since the establishment of Xiong’an New Area in 2017, the new area of national significance has always given priority to ecological conservation and adhered to its path of green development.

Thanks to its unremitting efforts to continuously improve the ecological environment of Baiyangdian Lake, strengthen biodiversity protection, and create a habitat for birds, Baiyangdian Lake has become a paradise of birds.