The four-story model is 1.8 meters long, 1.7 meters wide and 1.6 meters high. It vividly represents the magnificence and exquisite designs of the ancient building. The architectural style and details of the model, such as its eaves, rafters, arches, columns, column caps, and horizontal inscribed boards, were all created according to an ancient book on architecture, which is considered an encyclopedia of architecture in ancient China.

The model has 320 doors and windows, all of which were hollowed out according to the patterns and can be opened. Every door and window consists of 75 six-petal flower patterns, and each flower pattern is made up of six smaller triangular parts.

Qian, who runs a studio in Qiantun village, Xianghe county, Hebei Province, spent five years on the artwork and finished it in recent days. He created the model using all of the traditional craft techniques he has learned over the past three decades, including filigree inlay and ancient building model making techniques.

Qian was born into a silversmith’s family, and his grandfather and father were both filigree craftsmen. According to Qian, the art of filigree has fascinated him since he was little, having officially began to learn filigree techniques from his father after middle school. 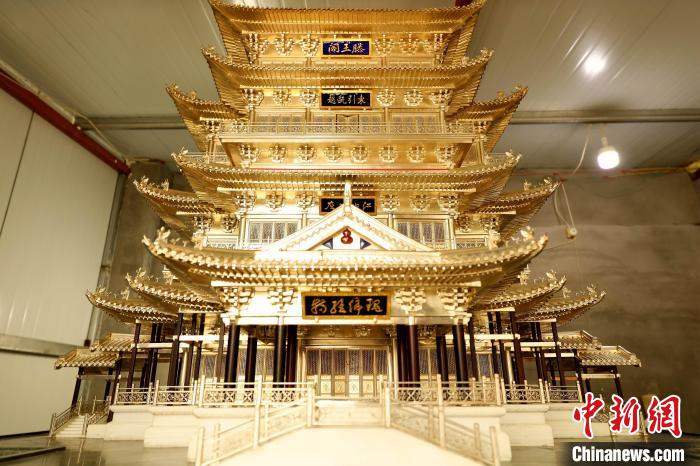 Qian’s father was very strict with him at the beginning and would always ask him to redo his work even for the slightest of mistakes, Qian recalled. In order to master the traditional craft, Qian worked much harder than his peers and finally stood out among his father’s many apprentices.

“Works of art must be made by hand, because only handmade artwork has its vitality and soul. While creating a work of art, every craftsman should try to give the work the spirit and soul the designer wants the work to have, thus injecting vitality into it,” Qian said.

“The creation of the model of the Tengwang Pavilion with filigree techniques was difficult. Every part of it is so small that the smallest error might ruin all my previous efforts. I needed to be patient and determined enough to make it,” Qian said, noting that the completion of the work marked the completion of a major test for him.