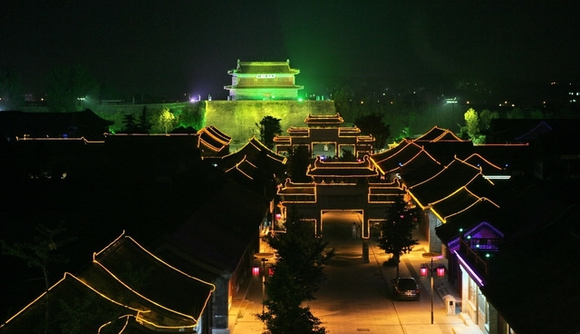 Night view of the Shanhai Pass, which is located at the eastern terminal of the Great Wall, in the city of Qinhuangdao, North China's Hebei province, October 11, 2009.[Photo provided to chinadaily.com.cn]

A new court was set up on Thursday in Qinhuangdao, Hebei province, to provide better judicial protection for the Great Wall's cultural relics and resources.

"The Great Wall Culture Protection People's Court is the first of its kind in the country, setting an example for places along the whole Great Wall," Zhang Li, president of the Qinhuangdao Intermediate People's Court, said at an opening ceremony for the new court on Thursday.

A symbol of the nation, the Great Wall is a UNESCO World Heritage Site, and meanders through several provinces and cities in China.

In Qinhuangdao - a coastal city about 300 kilometers east of Beijing, sections measuring about 220 km were built during the Ming Dynasty (1368-1644), with the most famous being Shanhai Pass, or Shanhaiguan in Chinese, which is located at the eastern part of the Great Wall where it meets the sea.

A district in the city is named after the pass.

As an agency of the people's court of Shanhaiguan district, the new court will cover civil and administrative cases, as well as public-interest litigation cases that are involved with the protection of the Great Wall and related cultural resources in Qinhuangdao, Zhang said.

She added the court will hear cases concerning property transactions, replacement of assets and disputes arising from construction of a Great Wall-themed national park, which is underway around the pass.

The nation last year issued plans for building Great Wall national cultural parks along the wall to fully demonstrate its unique cultural value. Running until 2035, construction of the parks will comprise four major parts: a conservation area, exhibition area, culture and tourism area, and utilization area, according to the task group responsible.

"The court will ensure the smooth construction and related work of the Great Wall National Cultural Park in the Qinhuangdao section," Zhang said.