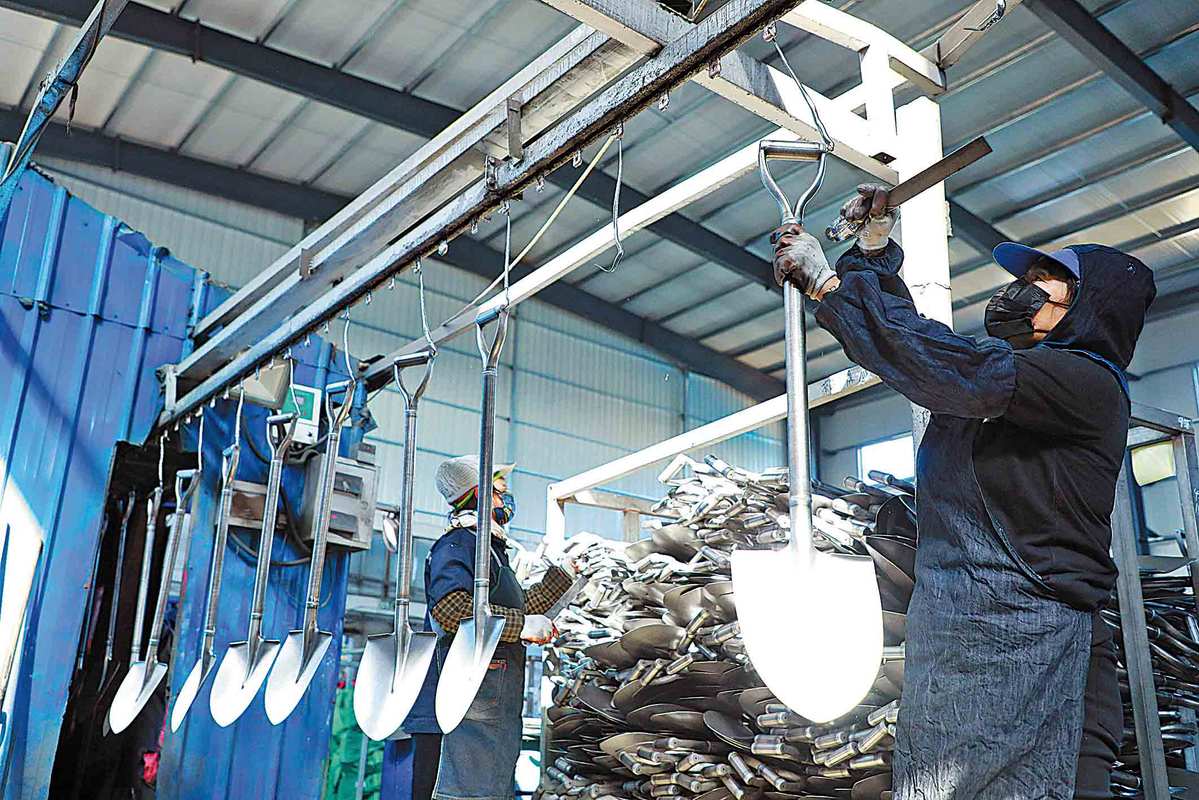 Two containers loaded with nearly 20,000 shovels were sent from Luannan county, in Tangshan, Hebei province on June 14, destined for supermarket shelves in the United States.

Luannan has a history of manufacturing shovels and other farm tools dating back to the early 1900s, and the county has developed a sizeable industry cluster that supplies almost 100 percent of domestically made steel shovels.

Welder Zhang Zixin is proud that the shovels he's produced are sold all over the world.

"It fills me with joy that the things I've made will be used by foreigners. I wonder what they will think of my work?" the 58-year-old said, adding he has made all kinds of shovels, ranging from those used for shoveling snow to small ones for loosening up soil.

Zhang lives in the town of Songdaokou in Luannan, a rural place boasting a cluster of shovel makers. He's welded metal and made shovels for 15 years.

"When I was around 18 years old, I would often see my uncle make shovels, but back then I felt the work looked tiring," he said, adding that the work environment at the time was very harsh, especially in summer with the hot and humid weather.

"Workshop workers would heat metal from old railroad tracks until they turned bright red, and then shape them into thin sheets by hand and roll them into the shape of a shovel," Zhang recalled.

Today, a lot has changed. Over 30 detailed processes are required to complete the production of a single shovel.

"Shovels in modern times are made with a high degree of mechanization, yielding high-quality products. I think that's why our products have become popular both in domestic and overseas markets," he said.

The small town of Songdaokou has developed into an important manufacturing base for steel shovels.

This industry originated in the village of Qizhuangzi in the town, where villagers learned to forge iron and make all kinds of farm tools in the early 20th century, according to Fu Changyi, a Songdaokou resident who has been engaged in the steel shovel industry for more than 30 years.

Some villagers began making iron pots and other cooking tools, as well as iron shovels, in the 1940s and then diversified to making steel shovels by learning other techniques in the 1950s.

"After that, more and more villagers got involved in the industry," Fu said.

In the 1990s, there were more than 1,000 factories making steel shovels in the town. After the year 2000, the local government established an industrial park specializing in steel shovels, Fu recalled.

The industry employs more than 5,400 local workers, and its related industries have provided more than 10,000 jobs. The average monthly income in the area tops 4,000 yuan ($600).

"Thanks to the solid industrial foundation, I have a pretty stable job," said Zhang, who works at Tangshan Shushi Hardware Tools Manufacturing, which exported more than two million shovels to Europe and the US in the second quarter of this year.

"They are made in Songdaokou, some by me," Zhang said proudly.